This submission by Beaumaris Conservation Society Inc. relates to the above proposal advertised on Page 3-11 of The Age newspaper of Saturday 10th January 2004.

The Society is opposed to the proposed discontinuance of the section of road reserve as it is attractive unfenced public open roadside space that is the present site of six substantial indigenous trees, one Manna Gum (Eucalyptus pryoriana)and five Coastal Tea Trees (Leptospermum lævigatum) as shown in the photograph below. The land adjoins the western extension of the existing narrower width of nature strip of the section of Holding Street between the land and Dalgetty Road. That adjoining section of nature strip has three Manna Gums Gum (Eucalyptus pryoriana) and three Coastal Tea Trees (Leptospermum lævigatum) growing on it. 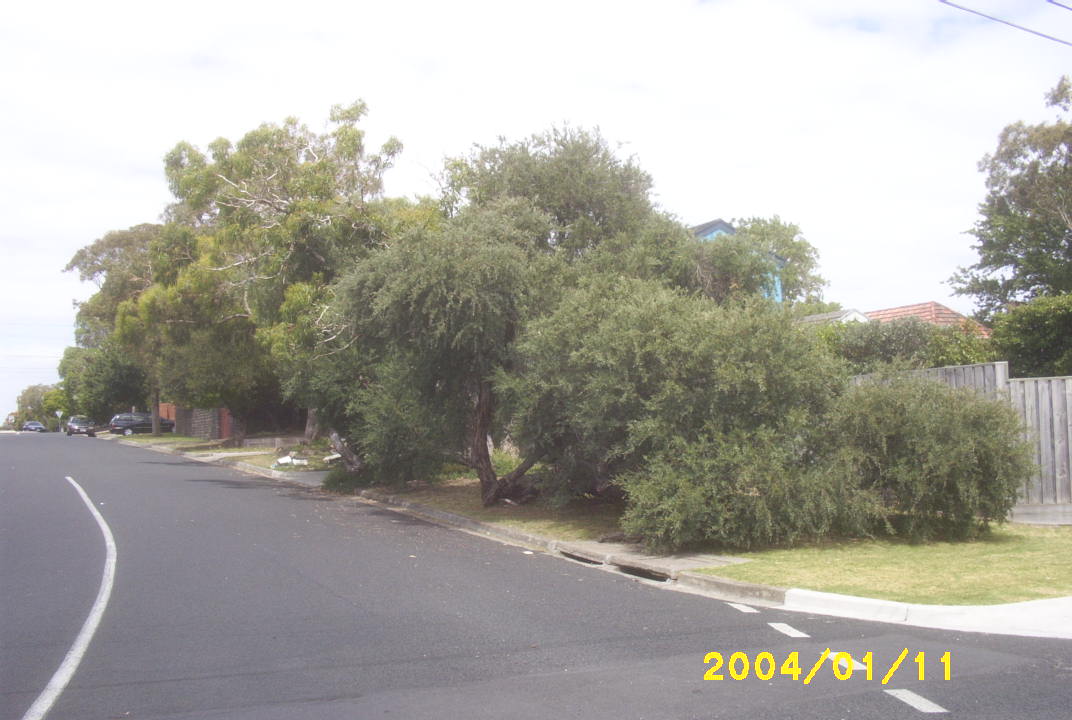 Indigenous Trees on and near the part of the Holding Street Nature Strip, at the corner of High Street,

Although the advertisement in The Age shows no measurements of the land, and there is no information on the proposal in the Public Notices section of the Bayside City Council Web site, it appears from inspection of the land that its dimensions are some 2.7 metres in width and 45 metres in length, making a total area of some 120 square metres.

The Society is aware that some or all of the trees might well be legally protected by the present planning scheme provisions and local law relating to indigenous trees, and that Council might make it a condition of the sale that no fence, other construction, paving or physical delineation of the new private property boundary resulting can be constructed or vegetation other than indigenous plants planted, but it considers that even with those apparent safeguards, there is a significant loss of public amenity involved in the proposal with no significant public gain.

There is, in the long term, an undoubted loss of public control over the
streetscape when public nature strips are narrowed as private control over
the fate of the streetscape is strengthened at the expense of the existing
public control. The attractive neighbourhood character of Beaumaris is being impaired at an unprecedented rate by over-intensive private developments, often as a result of decisions by the Victorian Civil and Administrative Tribunal that reverse the decisions of Bayside’s democratically elected Council. Retention of the attractive landscape vestige that this road reserve land represents would ensure that its future is less likely to be decided by a tribunal outside the local sphere, with no local representation on it, and more likely to be decided by Bayside City Council, which includes an elected representative of the area involved.

This small piece of land is a significant aspect of the Neighbourhood Character of this part of Beaumaris that is, unlike private land, essentially and primarily under the control and initiative of Bayside City Council. Council should resolve to maintain its character as treed public open space by not selling it, but retaining the present position.

I request to be heard, on behalf of Beaumaris Conservation Society Inc, by the Council or one of its Committees on the above matter, and ask you to advise me at the above postal address, or at the above fax number, of when that could be arranged, please.