According to a local resident who grew up in the area, this 1939 photo of heathlands in spring was taken somewhere near what is now the intersection of Reserve and Balcombe Roads. It shows a rich diversity of low shrubby vegetation, along with scattered clumps of eucalypts and wattles. It matches descriptions by early settlers and field naturalists and is probably typical of the pre-settlement vegetation of Beaumaris. Sandy dunes would have supported dry heaths and woodlands dominated by Coast Manna Gums and Narrow-leaf Peppermints. The moister gullies had wet heaths and woodlands dominated by River Red Gums and Swamp Gums. 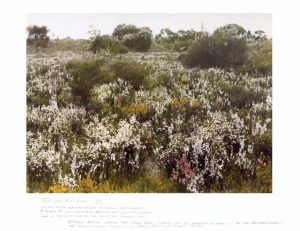 After Europeans arrived and the regular burning practices of the original inhabitants stopped, Coastal Tea-tree began to invade further inland all along the eastern shore of Port Phillip. The open heaths and grasslands rapidly dwindled. More dramatic land-use changes occurred as Melbourne spread southwards. Locally, a major bushfire in 1944 burnt through much of the vegetation east of Reserve Road and south of Balcombe Road at a time when settlement was still sparse. Then a housing boom after the Second Word War saw rapid subdivision and suburbanisation. Many of the new residents appreciated the bushland feel of Beaumaris. The Mid-century Modern architecture movement had a substantial influence, retaining some of the original landscape character while settlement encroached. By the 1950s very little of the original bushland was left in Beaumaris. Part of the Long Hollow gully was filled to create sports grounds for Beaumaris High School, which opened in 1958. Many roads were developed and housing intensified.

Noted field naturalist and pioneering conservationist Winifred Waddell (1884-1972) was so concerned at the rapid loss of habitat that she established one of Victoria’s first Wildflower Sanctuaries to protect what was left of the original biodiversity. Winifred Waddell’s patch of our original vegetation measures just 26 yards x 26 yards, and is located in the south east corner of what is now Long Hollow Heathland Reserve.

Immediately north of Winnifred Waddell’s reserve and south of the secondary school, the land was being considered as a site for a future primary school. When Beaumaris North Primary School opened in 1959 it was no longer needed, but it remained in the ownership of the Education Department. Considered a fire risk in the 1970s, much of the vegetation was slashed and removed by the fire brigade. Ironically, this raised community awareness of its value and also regenerated the heathland species. For a while, a keen teacher at Beaumaris High School used the area as an outdoor classroom. School children also helped weed and maintain the area. But by the early 1980s it had slipped into disuse, again being invaded by Coastal Tea-tree and weeds.

In 1982, Daintry Fletcher, the first Conservation Officer for the City of Sandringham, recognised the value of the area and undertook flora surveys with noted botanist Dr Jim Willis. It was soon identified as the richest remnant of the original vegetation of Beaumaris. Because it straddles both wet heath and dry heath communities, the area has more than 120 indigenous species of plants including many that are rare on a metropolitan scale.

Around the same time a Friends Group was formed under the leadership of Ken Rendell (a member of BCS) and operated initially as a sub-committee of Beaumaris High School Council. At the time, the area was known as the Beaumaris Campus Heathland. There are some wonderful insights into the history of the area in Daintry Fletcher’s 1988 booklet ‘The Bushlands of Sandringham’ (https://www.bcs.asn.au/wp-content/uploads/2018/03/sandenv7.pdf).

Regular ecological burning, initiated by the Friends Group in 1985, along with weeding and other regeneration work helps protect the conservation values of the area. It is recognised as being of State significance for its heathland vegetation and Regional significance for its woodlands. This recognition proved vital when the State government proposed selling the area for development in the late 1980s. Concerted efforts by the Friends Group, Beaumaris Conservation Society, local council and politicians led to it being gazetted as a flora and fauna reserve under the Crown Land (Reserves) Act in 1993. At that stage it was formally named as Long Hollow Heathland Reserve.

Almost everything you will see growing at Long Hollow can be identified using Bayside Council’s indigenous planting booklet and purchased for your garden from the Bayside Community Nursery: https://www.bayside.vic.gov.au/sites/default/files/lbpl_webfile_.pdf

The Friends of Long Hollow meets each month to care for and maintain Long Hollow Heathland. Working bees are held from 1 – 3 pm on the last Sunday of each month throughout the year, but are brought forward to 8 – 10 am during Daylight Saving to avoid working in the heat of the day in summer. New members are always very welcome and you don’t need any particular skills – ‘learning by doing’ is the best way after all. For further information contact Rob Saunders (srednuas@hotmail.com or mobile 0417 357 345).