Beaumaris Conservation Society Inc. refers to the planning application for 31a North Concourse, Beaumaris, and lodges its objection to this application for the reasons detailed below.

Impact on Public Trees and Land: The advertised plans show a balcony and awning extending along and over the north and east boundaries of the applicant’s freehold land, so that the proposed structures would protrude significantly over publicly-owned and publicly-used land. The structures would extend a considerable way into or over two existing large and well-established indigenous trees on the western nature strip on the side boundary in East Concourse. Those trees, shown in the accompanying photograph, were officially and purposely planted as street trees. The awning would not appear to serve any public purpose, as those footpaths, which do not lead to shops or car parks, are seldom used. 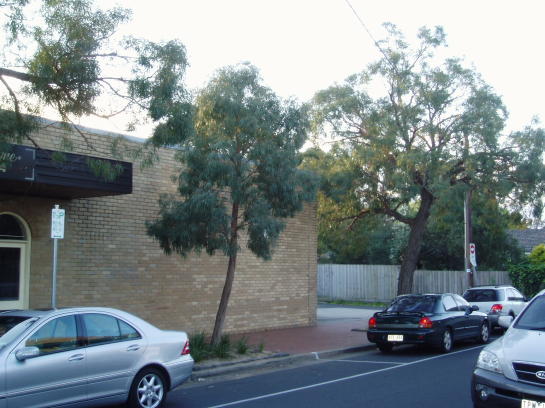 View of East Concourse boundary of 31A North Concourse, Beaumaris, on 5th September 2006

Value of Street Trees: The proposal would necessitate, or can be expected to lead to, the significant and inappropriate pruning of those trees. The trees appear to be Narrow-leaf Peppermint Gum-trees (Eucalyptus radiata). The impact of the structures on the trees would be severe, and be an unacceptable outcome for Beaumaris Concourse. As the Concourse largely comprises built form, roads and paving, there is limited area available for the planting of street trees. It is essential that Council seek to maintain and encourage the limited existing number and opportunity for street trees in the Concourse to protect the traditional village atmosphere of the Concourse, and its distinctly Beaumaris ambience, for the purposes of shopping, a place to work, conducting business, and general enjoyment of the facilities in this area.

For any proposed development in Bayside, as affirmed in VCAT decisions on Bayside, retention of street trees is a key requirement to be satisfied. BCS Inc. strongly recommends that this proposal be rejected in its current form based on the adverse impact it would have on the current and required future canopy structure of the adjacent street trees.

Opposition to Balconies over Public Land: BCS Inc. considers that private balconies should not be permitted to be built in public air space above public land. Such structures there, and their use, are an undesirable intrusion into the public domain, and provide scope for accidental or reckless actions that could result in offence or danger to passers-by due to noise, or the dropping of offensive or dangerous articles or substances. Such structures provide an intrusive yet protected stage for offensive or anti-social behaviour that is not easily controlled or subject to ready redress or sanction.

Acceptable Alternatives: An acceptable planning proposal would comprise a balcony structure that does not protrude over public land or interfere with the current and future growth of trees on public land. Such balconies should be set back from those tree canopies far enough so that future inappropriate pruning is not required or sought on the grounds that the growth of the trees to their full size has impinged, or threatens to impinge, on the amenity of the balconies.