Campaign 2016A: Retaining the Secondary College open space and vegetation

THIS CAMPAIGN HAS FAILED TO SAVE MANY TREES, BUT IT STILL SEEKS INDIGENOUS PLANTING. 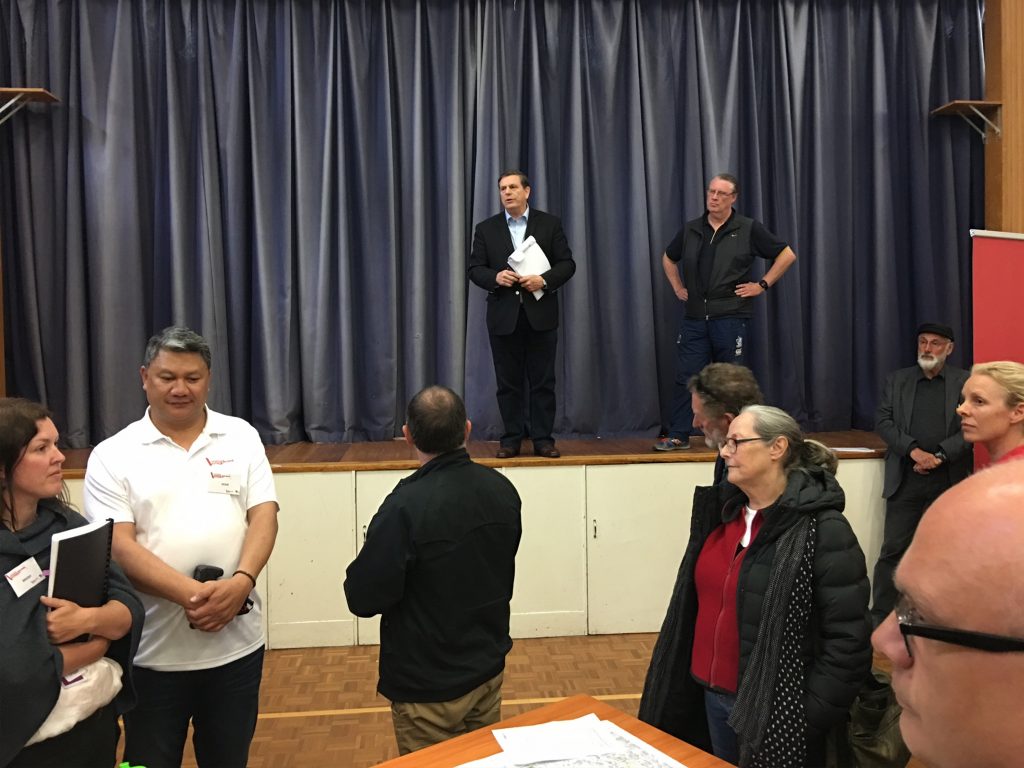 Murray Thompson, MLA for Sandringham, at left, and Greg Mier, BCS Inc. President, on the stage putting, points to those present, but Victorian School Building Authority staff present made no public response.

One of the three State MPs present, Murray Thompson, MLA for Sandringham, took the initiative, walked up onto the stage, and asked those present to hear points he thought needed to be made. The BCS Inc. President, who had previously listed some of the many community concerns, corrected VSBA statements that BCS Inc. was happy with the situation, but VSBA staff made no public response. The Shadow Education Minister, Hon. Nick Wakeling MLA, mingled with residents discussing their concerns with them, as did SuePennicuik, Greens MLC for Southern Metropolitan. Somebody had removed, by Saturday, the many people’s banners on the school site fence that had still been there on Friday!   * At last, obtained on 2016-11-09, six important documents, sought from the Victorian School Building Authority. See a 7-minute video of Heather Stewart on the school site putting the case for the trees.       *  See overflow information session – with standing room only – at the Beaumaris Community Centre, on 2016-11-16. A 96 MB aerial photo gives a zoomable high-resolution view of the school site then.

*  The following correspondence was sent to the Education Minister, James Merlino, on 18 November 2016 from a person who speaks with considerable experience in planning and design matters, and we have been provided with consent to share it with you, our concerned members.

I am a resident of Beaumaris and I support and applaud the government in its proposed redevelopment of the Beaumaris Secondary College. However, I am most concerned about the secret deal that has been struck with the MCC to occupy a substantial area of the crown land that is the Beaumaris Secondary College site.  You and two other Ministers are the only government agencies exempt from the operation of the Planning and Environment Act.  All other agencies including transport and utility authorities are required to follow the due process (full environmental assessment and consultation) in obtaining sign off for major projects.  This has obviously led to a serious complacency in dealing with affected communities that will inevitably have political consequences.   In this case, that complacency has led to the VSBA and government:

The time frame handed to the VSBA for completion of the school is obviously extremely tight, excessively so in my experience.  How else would there be contracts let, tenders called, equipment on-site, etc while plans were still in a fluid state and such basic investigations as vegetation reports are still being produced? While the community committee is dealing with your authority in an honest endeavour to obtain compromised vegetation outcomes, their hands and those of your officials are tied as long as the elements of the plan are fixed.  There must be serious modification to the proposed development plan (elements removed) if there is to be a reasonable conclusion.  Otherwise, you will be executing and enforcing this development plan over the serious and widespread concern of the Beaumaris community.* * * * * * * * * * * * * * *

* A crowdfunding page started by former Bayside councillor, Heather Stewart, has approached BCS Inc’s goal of $2,500 to fund a full written professional Arborist’s Report – which is now accessible above – on what has increased to 249 trees at risk and was instrumental in arguing – tree by tree – for proper justification before any tree’s fate is decided. BCS Inc. thanks the donors, whose names appear at that crowdfunding page.    * Citizens wearing red – to show anger – were at the school site from 7 a.m, on Monday, 24 October 2016, to deplore the Victorian Government’s early morning sneak chainsawing, at that stage, of up to 229 trees. Talks with a representative of the victorian school Building Authority sought more details of this plan before any tree loss, which was agreed as indicated at a petition update at Change.org.   BCS Inc. will provide more details of this plan here if it receives them.    * See Facebook page by Hon. David Davis MLC, Shadow Minister for Planning, on importance of citizens getting specific details, and time to interact before trees go, and not just spin. He agreed that a detailed notice board should be required to appear on the 80,000 square metre site – before any axing – as residents must properly do even if applying to remove one tree from a typical 800 square metre house lot. It seems that Government notice boards only appear for projects they are proud of, and not for those they are ashamed of.    * BCS Inc. letter to Hon. Daniel Andrews, Victorian Premier, from BCS Inc, seeking a halt to the planned removal of 229 trees from the Secondary College site on 24 October to give time for Bayside City Council and Beaumaris residents to learn how many of each species of tree is to be removed, the reasons, and the indigenous tree species to replace them, and for their views to be heard. An article describes this well. Some of the 250 people seeking answers and credible reasons for losing – at that stage – 229 trees. 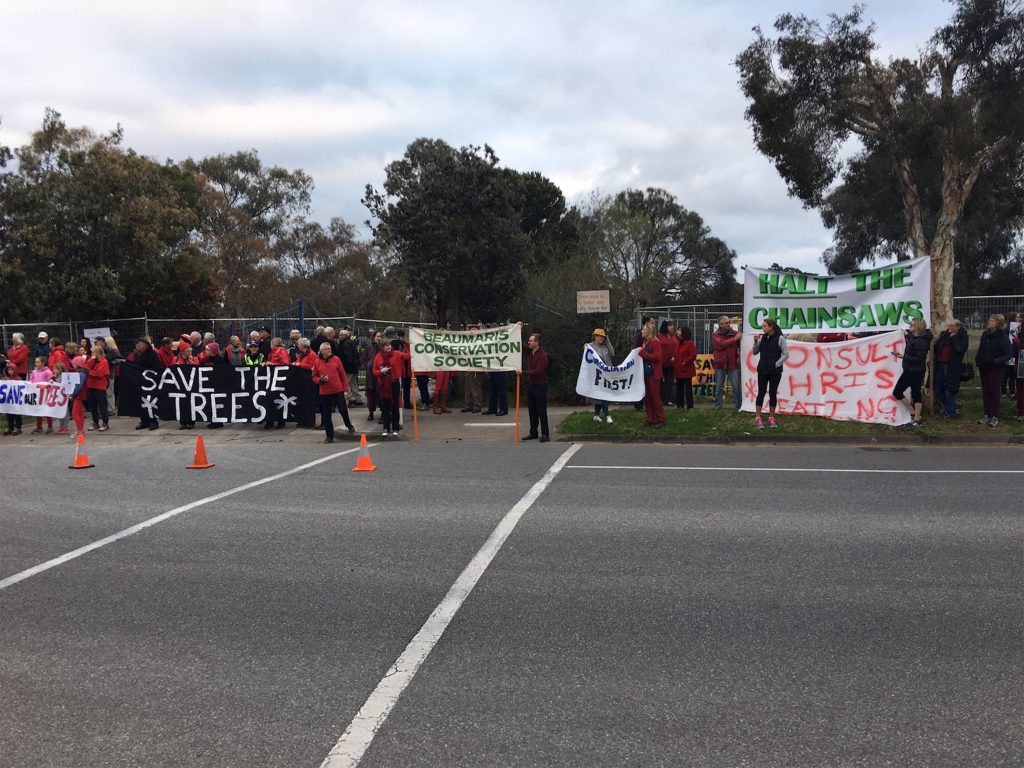 * BCS Inc. leaflet letterboxed to all of Beaumaris south of Balcombe Road on 21 October 2016* From Murray Thompson, MLA for Sandringham: Petition form for completion by concerned citizens, letter to the Premier and the Education Minister, and his Media Release 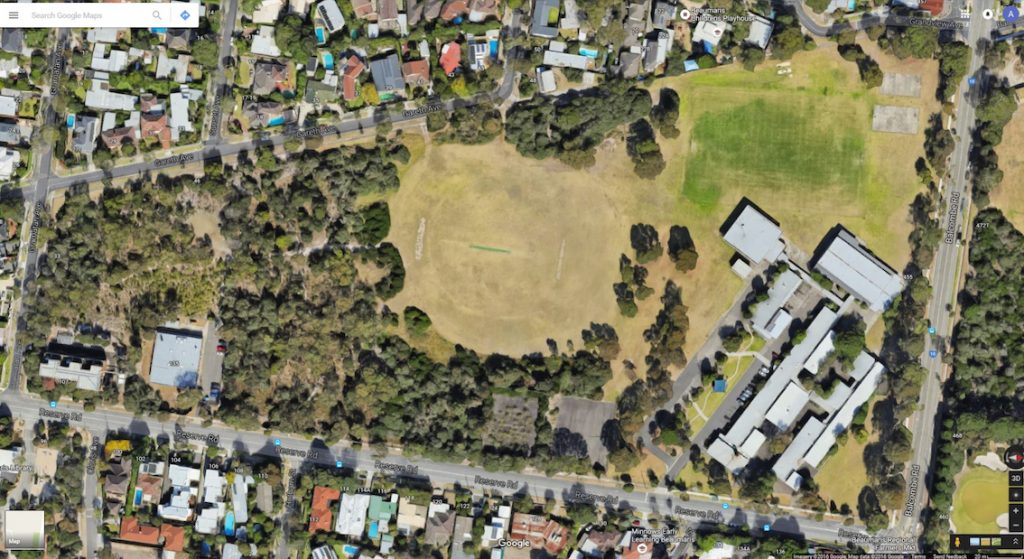 Google view in 2015 of the largest single inland area of public land in Beaumaris, on the west side of Reserve Road, between Gramatan Avenue and Balcombe Road

*A major email to BCS Inc. from the Victorian School Building Authority and its website page each propose the same list of replacement plants. Very many are not indigenous to Beaumaris (see schedule 3 to the Bayside Planning Scheme’s Vegetation Protection Overlay, which covers all Beaumaris residential land). Those non-indigenous plants will clash with and water down the present strong and highly-regarded indigenous character and beauty of the continuous bushland corridor, interrupted by only two roads, that consists of the nearby Beaumaris Reserve , the Long Hollow Heathland Reserve, the Secondary College, Balcombe Park , and Royal Melbourne Golf Club’s west course, as well as the many surrounding,  treed gardens. * The Secondary College site of 8 hectares was separated from a previously larger area of public land – as shown in a 1992 subdivision plan – to provide for the Long Hollow Heathland Reserve. The Reserve’s boundary is around the landmarked as the 2.35 ha Reserve No. 1 with an accompanying statement that title to that Reserve land, which was formerly vested – along with the school site to its north – in the Education Department, has been transferred to the Queen. That 1992 formal subdivision was instigated by the late GeoffreyConnard raising the matter in Parliament when he was one of the two Liberal MLCs for this area. As Crown land, it has been designated a Heathland Reserve under the management of Bayside City Council. On the Bayside PlanningScheme Map, it can be seen that the school land is zoned Public Use Zone 2 (the same as the two government primary schools in Beaumaris and the neighbouring Education Department next to the electricity substation), whereas the Heathland Reserve is zoned Public Conservation and Resource Zone, which is very protective zoning. That zoning does not bind the Government, but it sets a goal for it.

Return to the CAMPAIGNS page.

Link to the Port Phillip Conservation Council Inc. – BCS Inc. has been a Member Organization of it since 1970